You’re standing on top of a burning building with a rope in your hand and an iron pipe to tie it to. Quick, which knot do you tie? 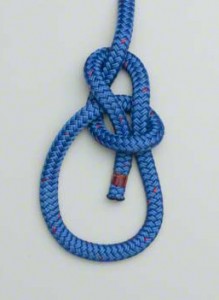 If you’re like most people – most people not being Eagle Scouts or America’s Cup sailors – you go by the philosophy that if you can’t tie a good knot, then tie lots of them, and the resulting rat’s nest of loops and square knots, granny knots and bows will probably do the job. And what choice to you have when the building is burning or the zombies are knocking down the rooftop door? You tie the knot and jump. But a big messy rat’s nest of knots takes a long time to tie and doesn’t give you any confidence that it’s actually going to hold: It’s more of a statistical knot, a probabilistic approach to covering your under-knot-educated, over-the-edge diving ass.

It’s a little bit like when you were in 3rd or 4th grade and you had that phase where you thought the more reasons you gave the teacher for why your homework was missing, the better. So the dog ate it and your grandmother died and you spent the night in the hospital with a possible pancreatic cancer, but it turns out you were okay though heroic for handling the pain so well thank-you-ver-much, and you hadn’t realized it was due today but you could probably have it ready tomorrow. You might try this once or twice (or if you’re me, one or two dozen times) before you learn that a single, simple excuse with good holding power generally works better than an array of excusal offerings.

Same with knots. You want something in your zombie survival toolkit that’s quick to tie, offers great holding power, and unties easily when the pressure’s off so you don’t have to leave your rope behind. In this case, the bowline (generally pronounced ‘bow-lin’) is your knot.

I learned this knot years ago as a Boy Pioneer (long story: the Lutherans in my day didn’t allow their kids to join Boy Scouts, so we had our own, insular, culty sort of troop).

But the way I learned to tie it is sort of slow. A few years ago I was on a sailboat watching a group of bored sailors race to see who could tie a bowline fastest. The winner was generally sub-second. I never looked into the technique until just now, but it turns out to be really simple and can, with some practice, be done single-handed, which makes it even more useful on board a boat, where one of your hands might be busy clinging for dear life to a boom or a spar as your life flashes before your eyes.