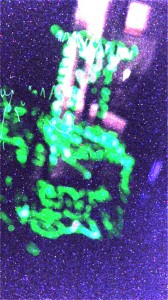 Sometime later in the year I’m going to make a computer-controlled laser cutter. You can makes them out of the step-motors and armature of old printers and scanners and some odds and ends from Radioshack or EBay (“odds & ends” being relatively powerful laser diodes and laser-protective goggles). There are a few instructions, here and here (both at Instructables; a great site for this sort of thing). Laser cutters are useful things for cutting, engraving, damaging your retinas and generally experimenting with the power and awesomeness of coherent light. But a laser cutter is a project for a warmer day – my garage isn’t heated, and given a choice of combustible buildings in which to try this, I’m going with the garage instead of the house. So, maybe May or June.

I’ve been fascinated with lasers my whole life. In 6th or 7th grade I wrote a paper on lasers, and as part of my research some scientists at the General Motors Tech Center agreed to show me around their new laser research facility. The laser they demonstrated and let me fire off a few times was a room-sized 48,000 watt unit – can’t remember if it was argon or helium based, but the scientist who chaperoned me around for the day is definitely the man responsible for putting ‘argon’ into my lexicon years before my peers knew anything about noble gasses or light amplification, leaving me for a short time, alpha-nerd in my corner of the Geekaverse. While my friends had been swapping out rusty steel wheels on their wooden Generation 0 skateboards, I had been blasting holes in industrial plastics with what I would later come to know was the technology behind Luke Skywalker’s light saber.

I kept up with lasers for years – lasers and I had had thing long before anyone else knew how cool they were. I imagine it was like dating Scarlett Johansson when you were in second grade; it gave you a kind of bragging rights, but it also sort of didn’t count.

Later when lasers were embedded in every $19 consumer device from flashlights to printers to cheap-ass golf course range-finders, I felt like my technology had cheapened itself, had quit the ballet to make a quick buck pole-dancing. Which is why when I got my latest laser pointer I needed to get a 50mw green beam version which is very powerful and very bright, but turns out to be too intense to use for anything except pointing at stars and scaring night creatures like owls and bats. The photo at the top of the page is my attempt at laser photography using this laser and the iPhone. The iPhone, it turns out, is the worst possible choice for this experiment – to beging with, it has awful low-light capability – note the blue/purple artifacts in what is generally a pitch-black room – and also, the green-beam laser is so bright it doesn’t trace a nice, fine line along the chair I was using as a model, but creates green blobs of hellish, burned-out plasma which might well be burned permanently into my iPhones camera sensor.

So there’s a lesson: don’t match a low-capability camera with a high-intensity light source. Sometimes cheap is best. Sometimes, there’s a beauty in cheap.

One thought on “Dream On”