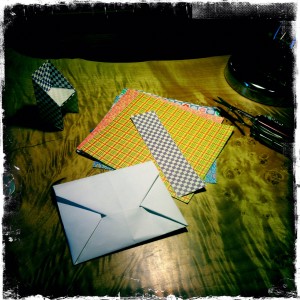 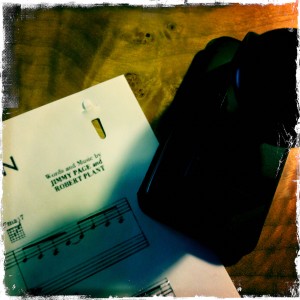 In German this is called a Papierkapunchencuttenfoldentthing. No, seriously.

One of the coolest things I own is a stapleless stapler given to me as a gift by some people I worked with in Tokyo, because I had told them it was the most Japanese thing I’d ever seen. You can find the staplers now in fancy paper stores – it’s just a little gadget that punches an oblong sort of tongue in a couple sheets of paper, then bends the tongue over and through a little paper strap that it also cuts, sealing the sheets together. So efficient and cool. So Japanese.

Paper is a fascinating thing, and nobody gets as much out of paper as the Japanese. Japanese paper is washi, but they have even more words than we do in English for different types and qualities of paper. I could go on, ’cause I got no end of boring, but let’s get to the origami – (折り紙) – ori for folding, gami or kami for paper. Thank you, Professor Brooks.

The main thing you’d probably want to do in origami is make a battle ‘droid.

Or maybe an ninja.

Wait, message coming in over the headset… no… you… wouldn’t….

The only thing a dude would want to make in origami is the little unicorn figure that Gaff leaves for Deckard at the end of Blade Runner. Gaff makes lots of origami, but the last one, the little unicorn that Rachel knocks over as she leaves the apartment with Deckard, that’s the one that sticks. I found instructions for that unicorn, but burned through all the origami paper in the house (a surprising amount) and didn’t manage to get the little critter right. I’ll keep trying, but I did learn two useful things, both shown in the top picture: an origami chair that will come in handy for an ongoing craft project, and an origami envelope that I will definitely practice and remember because it makes a nice self-sealing letter for when you’re on the road. Nothing wrong with adding to the road tools.