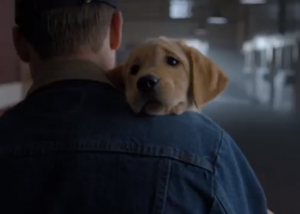 Who loves you babe?

What did I learn today? Well, I learned that a hot rural dude who raises Clydesdales can live right next door to an equally hot, blonde, puppy-saving babe, and yet they won’t meet until one of the puppies makes the first move (on one of the Clydesdales, so, a little weird, but kudos little guy: dream large) and the guy has to keep carrying the dog back to the puppy mill.

The guy, it turns out, sometimes sleeps with horses, albeit in one of the cleanest, most manure-free stalls in which stallion ever shook shaggy mane, which makes it not so bad, hygiene-wise – and the stall-sleeping could signal later relationship issues, but we don’t know yet. Tune in to the 2015 Super Bowl to see how this all shakes out. We’re rootin’ for you, Clydesdale dude and Puppy babe!

Now, let’s say you drink Budweiser. That’s about $1.70 per bottle purchased in 6-packs in upstate New York. And say you and your friends are going to drink 6 apiece during the Super Bowl, which means your 6-pack is going to cost you $10.25 for the Big Day. $10.25 is pretty close to the proposed federal minimum wage of $10.10, so that would mean a minimum wage worker would work one hour for his or her Super Bowl adult beverage allotment.

But wait: That’s the proposed minimum wage. The actual federal minimum wage is $7.25 per hour, which means you have to work about an hour and half for that 6-pack. But what’s an extra 30 minutes at a job you love? Oh. Maybe you don’t love your job? Maybe you’re just doing it to make ends meet or because it’s the job of last resort in your community? So maybe you do mind putting in an extra 50% of your time for a few of life’s basic necessities and pleasures? Maybe that extra $2.85 per hour, or $114.00 per 40-hour week would actually make a difference in your life, allow you to grab that extra 6-pack, eat a little better and buy your kid a new baseball mitt this spring without skipping a rent payment?

With the economy as bad as it’s been, who could possibly be against a minimum wage increase? Well, Congress, for one. Or rather, Congress for 535. That’s 435 Representatives and 100 Senators, the majority of whom do not want you – retail clerk, short-order cook, nanny, Home Depot greeter or tire breaker – to earn more than the current minimum of $7.25 per hour. The wage increase was up for a vote in 2012, and every House Republican voted against it, with 6 out of 190 Democrats joining them in the NO vote, for a winning count of 251 votes against the working class.

Who are these congresspeople people who have so much say over your life?

Well, they’re workin’ folks, just like you, except that their salary might be a little higher. But like many of us, they’re living with a wage cap – congressional salaries were capped as of January 2009 at $174,000 per year. Except for Speaker Boehner who gets $223,500. And the majority and minority leaders who make $193,000. Oh, and they also have a cap on the amount of honorarium they can accept – speaking fees and that sort of thing – and that cap is %15 of their salary (which you can safely assume they max out each year), and that puts their actual, effective salary cap at between $200,000 for the average congressperson and $265,000 for Speaker Boehner. Divide that by 40 hours per week (I’m being generous here) and 46 weeks a year, and that’s about $108/hour for the average rep and $144/hour for Mister Speaker.

But wait, there’s more. As of this year, Congress officially is made up of 51% millionaires. That is 270 out of your 535 reps and senators have a declared net worth of more than a million bucks. In fact, the percentage is much higher (you can check out a partial list here) because some of the alleged “poorest” congresspeople are only “poor” because they’re sitting on tens of millions of dollars in debt. You only have that kind of paper-debt if you’re actually quite rich, but that’s a subject for another day.

The richest guy in Congress has a net worth of about a half billion. Those of you who invest know that any decent investor can get at least a 3% return on his or her money, so a million dollars of income producing investment would earn about $30,000 a year. Boehner declares he’s worth about $4,000,000, so let’s put his investment income at an extra $120,000/year for a total of about $385,000. I’m happy to be corrected if somebody knows better, but it seems reasonable to say that U.S. Senators and House Representatives make, at the low end, $230,000 (that’s a senate salary plus the honorarium cap, plus $30,000 in investment income), and on the high end, about $15,000,000 (that’s a very conservative estimate of the interest income on a half billion, with the senate salary ignored because at that level, who really gives a shit? And could you please move that palm tree? It’s blocking the light in my favorite chaise lounge spot.)

Breaking it down we’re looking at the poor senators earning $125/hour and the better off ones earning upwards of $8,000/hour.

These are the people who have decided that you are just fine at $7.25/hour.

In 1970, with the minimum wage at $1.60 per hour, a 6-pack of beer cost between $.79 and $.99. You could get 2 six packs of inexpensive beer – or a 10-pack of a premium beer like Budweiser – for your hour’s work. When you sit down tomorrow to watch the Superbowl, take a look down at those $10,000 seats at the 50-yard-line. The people sitting there, and the millionaires they have working for them in the United States Congress, have decided that you only need to drink half as much as your dad did in 1970 when he watched the underdog Kansas City Chiefs take apart the heavily favored Minnesota Vikings in Superbowl IV. Or that you can work twice as hard to have just as much fun as your dad had.

So go ahead, vote Republican again. Enjoy the taste of that Budweiser. Does that taste like victory to you?

Here’s to you, Working Class Hero: