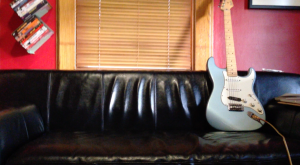 The classic Mexican Fender Strat my friend Don spotted on Craigslist for $90 a couple years ago. Still my go-to device for disturbing the peace.

That said, nobody can claim to play guitar if they can’t do ‘Stairway to Heaven’, and I’ve been messing around with guitars for the past 7 or 8 years without even attempting it, which makes this a prime candidate for a musical lame-ectomy. With a bit of instruction from the very useful Marty, at GuitarJamz.com I picked it up as best I could to be my 2014 opener.

How did it go?

Well, I videotaped a few of my best attempts, but they were so awful I couldn’t even edit together a faked version that sounded like Stairway. More like Scareway On a positive note, while it took the better part of the first day of the year, I did manage to memorize the chord progression and the finger-picking pattern. I can play it, just not at speed. Or to a beat. Or with clean, crisp fingering. But I’m chalking this up as a victory for my January 1st effort. Once I smooth it out, maybe I’ll tackle it later in the year on the uke.