When I was in college I read this book about a 16th Century monk who goes off to China to convert the citizens to Catholicism, but ends up spending more time training them on his memory system than he does actually spreading Christianity. His memory system is well known now; it involves memorizing a large, complex physical place – in Matteo Ricci’s case, a palace, in other cases a large, formal garden or a complex of barns and stables or anything with a lot of detail and features. Then, when you need to memorize something you mentally walk through the space placing elements of what you’re memorizing in places along a path through your memory space.

My problem with this has always been memorizing the large and detailed space in the first place, but the Jonathan Spence book explains, at some point, that Matteo Ricci didn’t actually have to memorize the palace of his memory space because he grew up in it. He just put things in places that he remembered.

So that makes sense. To use Matteo Ricci’s system you simply need to grow up in, say, Vatican City, Buckingham Palace or the gardens of Versailles. Then, when you need to memorize something – say a shopping list, because all the servants have a day off and you have to actually go to the store yourself because it’s backwards day – you just put the strawberry jam in the Ming Dynasty vase next to the entrance to the throne room, the quart of milk in the glass cabinet of curiosities in your father’s map room and the fish sticks under the cook’s assistant’s pillow where she keeps the yellow silk knickers she wore for you on your 11th birthday.

I grew up in a three bedroom ranch house on the outskirts of Detroit, and we summered at a lake that had a single pump and an outhouse with cracks in the walls so wide you could watch people swimming in the lake, 50 yards away, and the people on the beach could see that someone was in the outhouse. Very convenient.

When I want to memorize something I place things in sequence around the outhouse. It’s not quite the memory palace of a young Viennese Count, but it works for lists of less than 20 items. Which means it will work for the Circle of Fifths. 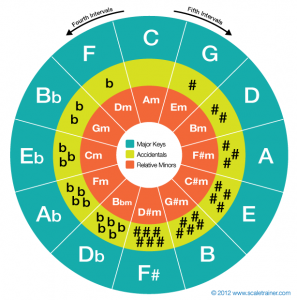 I memorized this today, and in the end did it in such an idiosyncratic way that it wouldn’t work for anyone else. First, it helps that the circle of fifths diagram looks like the end of a toilet paper roll, so we start there by placing the key of C on the roll. CG is my next youngest sister’s initials, DA are my initials and EB are my father’s, so that gets me halfway around the roll: CGDAEB. Then it’s just brute forcing our way around: F# goes on the rusty hinge and all the rest of flats associated with them, but are my and my father’s initials until we hit another F, so F#,Dflat,Aflat,Eflat,Bflat,F. The ‘F’s don’t really fit in my memory system, though my memory palace is very Effing tiny, so I can at least remember that, which gives us the whole shebang: CGDAEBF#DbAbEbBbF.

Not bad. I can keep that in memory, limited though I am by not having been raised in 16th century opulence. Poor Ricci had to live without modern conveniences like Tumblr, 30 minute guaranteed delivery time on pizza, or an electric guitar on which to practice the chords around the circle of fifths.