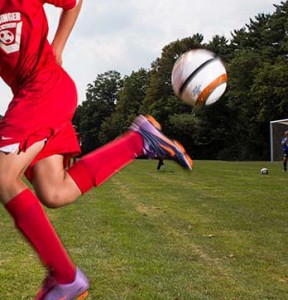 On a usefulness scale, pen spinning has to rank pretty low, which makes it an attractive thing to add to my arsenal of uselessness. But in the world of soccer – or as we say in America, that sport they play in Europe every 3 or 4 years – there’s a yet more useless skill, and that skill is known as The Rainbow.

The Rainbow is the Quarterback Sneak of soccer, a play that everyone knows, but that’s used in serious play about as often as a half-time wardrobe malfunction. I coached girls’ soccer for 10 years and a lot of the players learned to do it but never used it in a game or even in a serious practice scrimmage.

It is, however fantastically demoralizing if you can fool somebody with the move.

To execute the move, you trap the ball between your feet, use the toe of one foot to roll the ball slightly up into the arch of the opposite foot, and then having hooked the ball with your arch, you flip the ball over your own shoulder or head, or sideways and forward. If you do it fast enough your opponent won’t be ready for the unexpected direction and they stand flatfooted looking for the ball, which you head toward the goal, snickering.

It’s also known as a Flick Pass, a Rainbow Flick and other things.

Here’s some pros, using it in earnest, along with other great moves:

And this is me, today, skillin’ up, and finally getting a couple right:

One thought on “Waka Waka”