Chickens are the main reason we’re not living in a rent controlled apartment on Central Park West.

When my daughter was about 7 years old we built a chicken coop as part of a 4H project, brought the coop home and got 4 Dominique hens from McMurray’s Hatchery. The 4 hens soon became 8, then 12, and eventually, 24.

At the time we were splitting our time between our weekend house in Woodstock and our apartment in New York City, but the burgeoning flock required us to start spending more time in the country. So when a long-term consulting position at Columbia University came to an end, it became clear we had to choose one place to live over the other and the obvious choice was to be at one with our chickens.

We had just won a short but bitter battle with the landlord over our right to our apartment, so they were happy to be rid of us, but surprised that we were giving up the place only 2 years after we’d trounced them in New York Housing Court. Our explanation about the pleasures of eating our own fresh eggs left them nonplussed; they seemed to read it as sarcasm or maybe a metaphor, even if they couldn’t quite figure out what the egg part of the metaphor represented. Either way, they were happy to be rid of us: Friends who stayed in the building reported that the rent for our apartment shot from the $1000 we were paying to $3200 the instant we were out. I’m also sure – because the landlords were soulless money-freaks – that they tore out the beautiful pre-war bathroom as part of the “logic” for upping the rent on the next tenant.

But back to the eggs.

Fresh eggs from your own hand-raised chickens cannot be beat. You get about an egg a day from each hen during the warm months, so with 24 healthy birds you have a couple dozen eggs to collect every day. We’ve become pretty inventive with eggs and can make a reasonable tart (thanks to our friend Beatrice), Spanish frittata, a couple different kinds of chocolate mousse, ice cream, marzipan and the usual array of eggy breakfast dishes.

But soufflés are different, or at least they’re reported to be different. I need something to learn today, and how difficult can a soufflé be? Looking over the ingredients it’s not clear why you’d go through all this effort when you could put the same stuff in a bowl and make an omelet. So, let’s give it a shot. 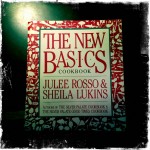 The New Basics cookbook has never steered us wrong before.

Step 1: find a cookbook with a soufflé recipe. New Basics has always stood us in good stead, and it had one. 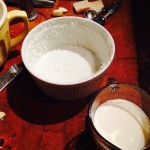 Butter a ramekin and dust it with grated parmesan.

Step 2: Butter one of those suave high-sided baking dishes that line the shelves of Williams & Sonoma, and grate some parmegiano all over it so it sticks to the butter and the inside of the dish looks all hairy and weird. At this point I realize that the New Basics recipe calls for a 6 cup dish and mine is more like 8 cups and so I decide to increase everything by about a third. 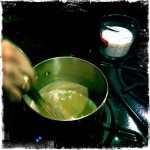 No matter how scary and French it sounds, it’s just butter and flour.

Step 3: Make a roux. This is the sentence that usually makes me set down the cookbook, back away and consider my fast-food options. What sort of food needs a silent ‘x’? But this time I do it – it turns out to be little more than butter that you get sizzling in a pan and then you add some flour to and let it turn brown; then you add milk and cayenne pepper. The cayenne restores my sense of trust and I’m willing to take the next step. By the time I dump it out of the pan into the big orange bowl it’s a sort of thick, milky jelly that you might use for a special effect in a gross-out film, but at least I know it’s going to be spicy. 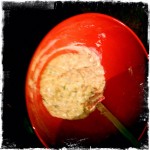 Step 4: In another bowl you add some egg yolks (4, in my case) and whatever flavors you’re going to use. At this point I have to confess, I hadn’t so much read the recipe as skimmed it. I see we need prociutto and chives, neither of which we have. Furthermore we don’t eat ham, so that’s not going to work. Fortunately, a friend has just started a business smoking salmon, west-coast style, which means with a lot of smoke. I sub the salmon for the ham and use tarragon for the chives. Close enough.

Step 5: I’m not adding a photo for this, but you take the egg whites that used to be with the yolks from the previous step, plus an extra egg-white or two (two in my case), and beat the hell out of them until they’re stiff. Every man has his own definition of stiff, so I can’t explain this part. I used 5 egg whites and they were way stiff. 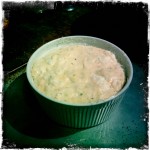 Combine the stiffened egg whites with all the flavored stuff.

Step 6: You could probably just dump it all together, but then you’d destroy the nice lofty whites with the gloppy egg-yolk-and-salmon mixture, so instead you add a big spoonful of the whites first to lighten the glop, and once it’s folded together you can add the rest of the whites and still have a relatively lofty final mixture. 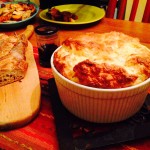 OMFG, this thing is delicious. The outside is a bit crusty and breadlike, and the inside is gooey and cheesy, but light and flavorful. I’ve never had anything like this. Amazing. I would serve this to visiting dignitaries. I would even go so far as to make it again, though probably not this week as I’m not sure my arteries can take it.

For all the substitutions and guesstimations, this is a heady success. My lame attempts of the past few days are erased. Forget the guitar and knitting needles, my true calling is in the kitchen.