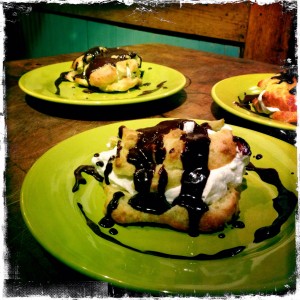 Some days are just a cheat. Okay, I made the choux pastry dough yesterday and used most of it for savories to go with soup. I knew perfectly well what I was going to do with the rest today, which is bake the dough into nice, lofty puffs, fill them with sweetened whipped cream and melt some chocolate over the top. So that’s what I did. Turned out great. If I learned anything about cream puffs it’s to bake them thoroughly – more like 30 minutes, rather than the 20 minutes of the savory version – or else the dough collapses, making cutting them open to fill with cream not quite as easy, and leaving them not quite as fluffy and nice looking as they should be.

A friend of mine in Seattle is a pilot trainer for Boeing, currently specializing in the 787 Dreamliner. Spends a lot of time in a simulator, running pilots through disaster scenarios and making sure they know all the recovery procedures and emergency landing routines. He’s offered to get me some simulator seat time if I can get out to Seattle, and has tentatively suggested that as part of learning something every day, he could teach me to do barrel rolls – I used to fly with him a lot, back in college, and he’s also a qualified acrobatics trainer, so he’s not joking. This would be beyond awesome.

Today, this friend did ground-based emergency training on the 787 and texted me about it. He learned all the fire prevention drills, how to use the onboard fire extinguishers, egress training, how to deploy the life boat and use the survival equipment, how to properly use the plane’s crash axe (I want a freaking crash axe) and then they practiced diving out of the plane on the escape slide.

At least the battery on my creampuffs doesn’t burst into flames over the Pacific.