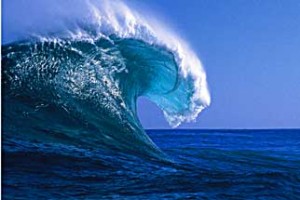 Water, in Chinese, is pronounced shui with a falling/rising intonation, and sui or mizu in Japanese, where they use the same character but just sort of wing it on the pronunciation.

The first phrase above is “May I have some water?”, the second one is more like “May I have water?” Usually in Chinese you have ‘ma’ at the end of questions, but water, and questions about water, are pretty common so you go with the idiom. And note that in the first phrase you have the number one (the character that looks like a dash). Once you specify a number (or generally even an article) you need a classifier (sometimes called a counting article), and the proper one in this case is ‘xie’. A lot of Chinese is simple, but classifiers are weird – they just are – and you just have to brute-force memorize them. I used to know a more classifiers, starting with the most important one, ‘bei’, which is critical to ordering beer (peijiu) because it’s used for things in glasses, cylinders and other similar containers.

The most common counting article is ‘gè’ which is pronounced just the way it looks, and which our Chinese teacher, Hong, told us (somewhat resignedly) works for anything in a pinch – used out of context it sounds like baby-talk to an actual Chinese speaker, as though you were indicating everything as a ‘thing’ – “I’d like a thing of beer” instead “I’d like a bottle of beer”, “a thing of gum” instead of a “stick of gum”, “onna dem tape things” instead of “a roll of tape”. If you use ‘gè’ for everything you’ll sound like either an infant or a moron, but you can at least get your idea across. But ‘bei’ is important because if you get it wrong you might be laughed at instead of being handed a nice, icy adult beverage: 请给我一杯啤酒 which is pronounced, “Qing gei wo yi bei peijiu”. May I please have a beer. Note the similarity between that phrase and the one at the top which gets you a much more disappointing glass of water. Really, who cares about the classifier for water? Just use ‘gè’.

Okay, so I started out on water and ended on beer. I don’t know how that strikes you, but to me it’s a natural progression. Beer is mostly water so I’ve always wondered why there’s no water element in those kanji characters. And in many cases beer is safer to drink than water. There’s a theory amongst both brewers and raging alcoholics with nothing else to talk about during college football halftimes, that the development of beer mirrors perfectly the development of culture. In tandem with collectives, towns and cities becoming crowded, the water quickly becomes unsafe to drink, but along comes beer brewing to make it safe again. And not just safe, but downright fun. In medieval England, I’ve heard nobody drank water regularly – preferring not to risk dysentery, they stuck with beer.

Over at How Stuff Works they talk about how water can go bad. And, as we learn at the above video link, it’s New Jersey’s fault that it’s possible for water to go bad at all.

Somehow, I already knew this: Thanks, Chris Christie.

But it’s beer that makes it good again.